“This is one of my favorite pictures,” Prof. William Wylie said as he addressed the robust crowd, which had gathered …

Take a Journey Through Pompeii with Photography Professor William Wylie

Each time University of Virginia photography professor William Wylie returns to Pompeii, he finds something new to awe, humble or …

This Student’s Superpower is Photography

Sarah Dodge says photography is in her blood. The third-year University of Virginia student is a media studies major and a …

I am happy to present the photographs of Alice Bailey. Being asked to be a part of The State’s Project …

The LOOK3 Festival of the Photograph features artist talks and exhibitions by legendary photographers, as well as outdoor projections, free …

#UVAPhotoContest Showcases Life on Grounds as the Year Winds Down

Each year, the #UVAPhotoContest captures the most picturesque locations on the University of Virginia’s Grounds through photos posted on Instagram. …

A Lifetime in the Making

It is with great pleasure that the Global On-Grounds Committee announces the inaugural juried UVA Global Lens Photography Exhibit.  The …

It’s magical – the limitless, untouched wilderness seen from a plane,” Acacia Johnson said of the experiences of nature she had growing up in Alaska. For her, that magic permeates both the Arctic and Antarctic, where she has spent much of her time over the past 10 years.

Johnson, whose photo essay on the Inuit people of the Arctic’s Baffin Island graces the September issue of National Geographic, has set aside her camera to focus on writing fiction in the University of Virginia’s Creative Writing Program.

After earning a degree in photography from the Rhode Island School of Design in 2014 and logging 55 trips as an expedition guide in the Arctic and Antarctic, Johnson dreamt of returning to school for creative writing, and perhaps writing a novel. She appreciated that UVA’s Creative Writing Program funds every student equally, so she applied. 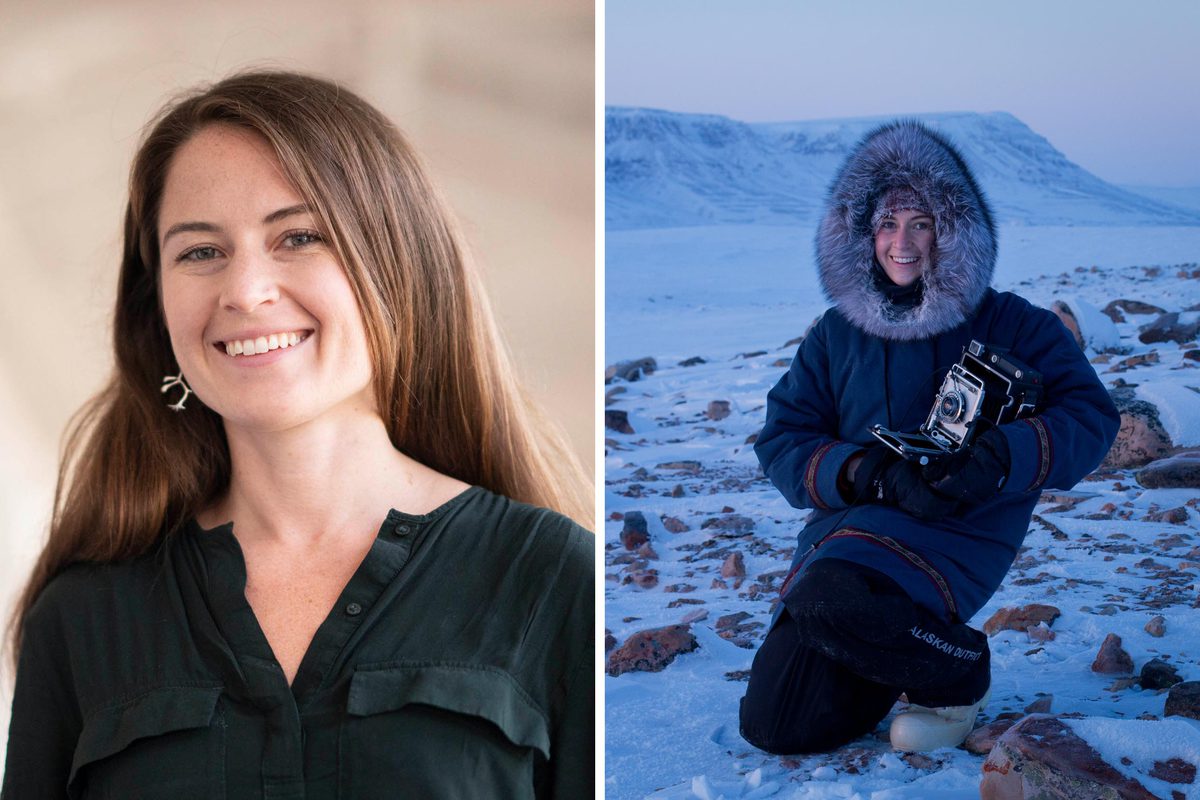 “I was surprised and excited to get accepted,” she said.

The writing program and her own writing work have been so intense, she hasn’t yet taken her camera out of the bag, she said. In addition to being in the fiction-writing workshop led by creative writing professor Micheline Aharonian Marcom, she’s taking an “Exploring Genre in Contemporary Fiction” course with Chris Tilghman.

“We are super-excited to have Acacia as part of the UVA creative writing community,” Marcom said.

Marcom is seeing more authors incorporate art or photography with their writing. It will be interesting to see how Johnson’s work in photography and now stories will work together, she said.

Born and raised in Anchorage, Alaska, Johnson said her family spent a lot of time outdoors, and that influenced her creative drive.

Although Anchorage is a mid-sized city, it’s easy to get close to nature in Alaska, especially since her father flies a bush plane, Johnson said. The family, including her mother and brother, would take trips to see bears or to go kayaking.

With her father being an avid amateur photographer, there were always cameras around. Johnson got her first camera at age 9 and started taking photos seriously as a young teen.

At 17, she was an exchange student at a school in Arctic Norway that specialized in media and communication, where students made films, learned graphic design and photography, and wrote articles. As a photojournalist intern for the town newspaper, she got her first taste of publication. The Norway experience was “a pivotal moment,” she said. 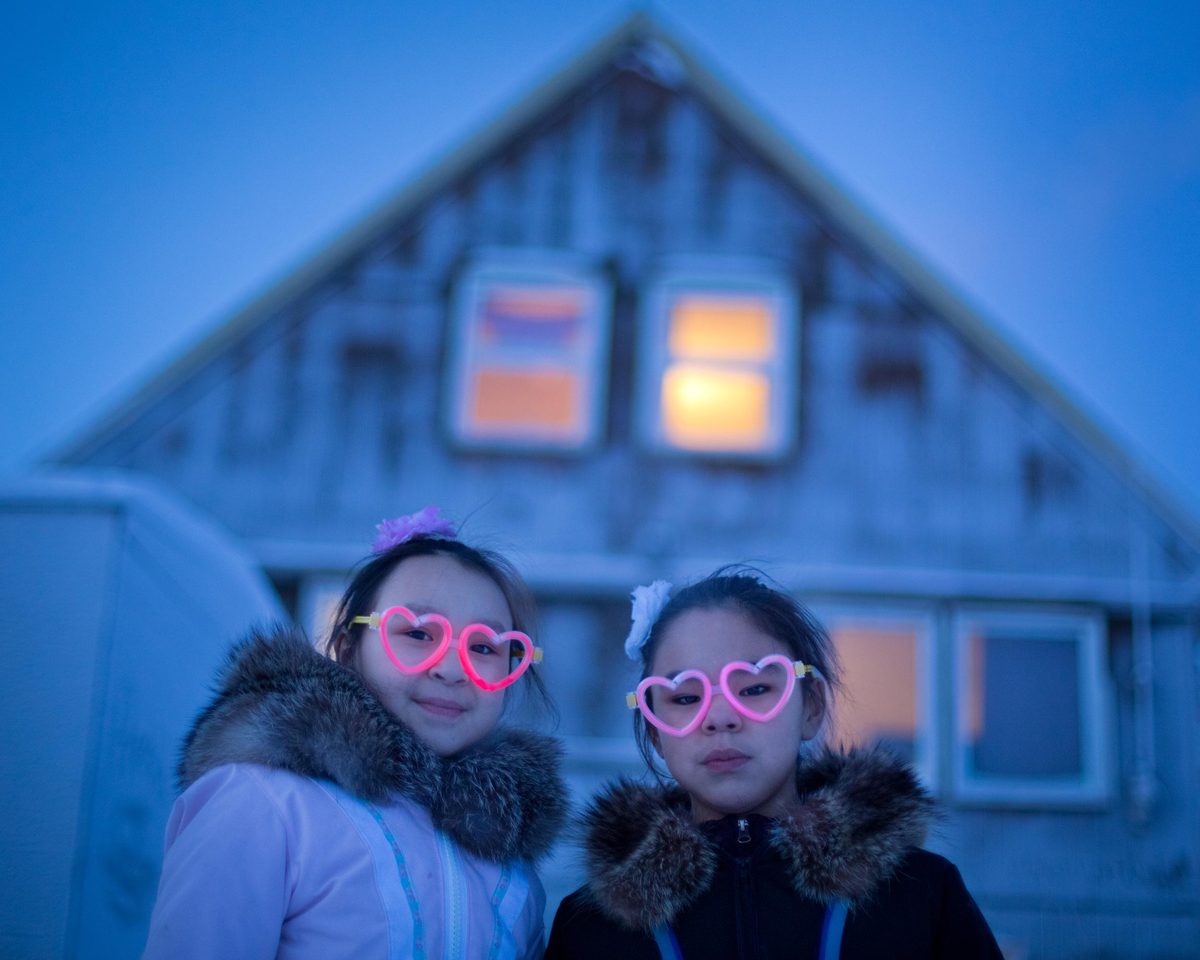 After college, Johnson spent four months in the community of Arctic Bay on Canada’s Baffin Island in winter, which she described as “dark and dreamlike.” (Photo by Acacia Johnson)

“I’ve always been interested in the wilderness and the human connection to wild places,” she said. After college, a Fulbright grant enabled her to spend four months in the community of Arctic Bay on Canada’s Baffin Island, which she described as “dark and dreamlike.” Her photo project, “Under the Same Stars,” captures the darkest part of the year and the Inuit, the indigenous people who live in northern Canada, as well as parts of Greenland and Alaska.

“I’ve always been intrigued by the Arctic,” Johnson said. “It has a history of human habitation for thousands of years; people don’t realize that. It’s rich and vibrant, has an amazing energy. The Far North in general has wild contrasts all the time. In the winter, it’s dark, cold, austere. Life comes flooding in in the spring.”

During Johnson’s first winter in the Canadian Arctic, only the Inuit men went out hunting. The women told her to come back in the spring when everyone goes on weeks-long camping trips, so children can learn traditional ways. Johnson knew she wanted to return to Baffin Island, but it’s so expensive just to get there – the flight alone costs $7,000 – that she spent three years raising funds.

In the meantime, she worked mostly as a tour guide in the Arctic and Antarctic, usually spending about four months on a ship and staying in Norway or Sweden when not guiding. In the gaps, she would work on her own photo projects.

She finally made it back to Baffin Island for two months in 2018, living with a family and accompanying them on camping trips. She titled that photo project, “Sea Ice Stories,” hoping to convey the importance of stable sea ice to human life and culture across the Arctic. 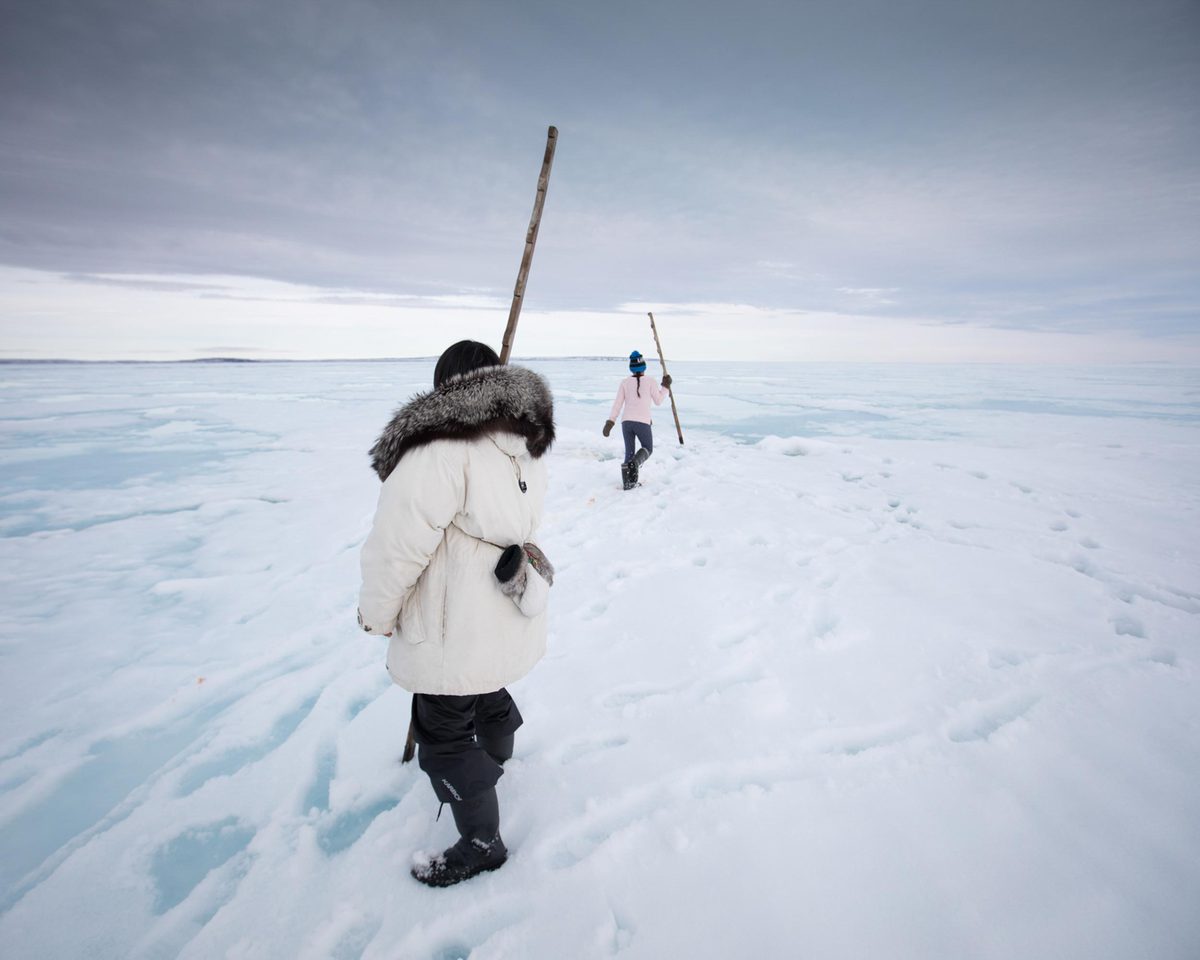 Johnson said she has a deep affinity for the northern landscape, but when she went to Baffin Island, she realized she “knew nothing” compared to those belonging to cultures that have long lived in these environs. Staying with a family, she developed a deeper sense of what it means to live there.

“There I learned how little I know and the vastness of indigenous knowledge,” she said. “After all I’ve learned, I now see that I’ve only glimpsed the very edge of that knowledge. It moved me to grasp how much there is to know.”

She told the story of a friend in his 60s who had grown up in a traditional lifestyle – until the Canadian government forced the indigenous people to move into towns during the 1950s and ’60s. “It took him many years to recover from the trauma he endured as a part of that transition,” Johnson said. “Continuing traditional ways of life helped him.”

Johnson grew up with an anti-hunting ethos, mostly in reaction to trophy hunting. But she learned to appreciate the Inuit’s subsistence hunting of seals and snow geese, she said.

“It’s the heart of their culture and identity. I was humbled to be part of it.”

There’s also an urgency among the Inuit to maintain and pass along their way of life, which is now threatened by climate change and socioeconomic change, Johnson said.

Marcom, the creative writing professor, said writers have a role to play in telling the stories of climate change. “It’s really important that writers can tell powerful stories” about what’s happening, she said.

That is what Johnson tried to do in her National Geographic piece, “Before It Melts.” She writes,  “In the past three decades, multiyear ice, the thickest (and oldest) type that supports the Arctic marine ecosystem, has declined by 95%. Elders no longer can predict safe travel routes on thinning ice, and animal migration patterns are changing. The future of the ice – and those who live on it – is uncertain.”

Getting her photo essay in National Geographic was lucky, Johnson said. The magazine can be planned out years in advance, but when she showed an editor her project, “Sea Ice Stories,” in January, it coincided perfectly with an upcoming Arctic issue. Johnson had had a few small articles published online by National Geographic in the past, including an assignment to Deception Island, an active polar volcano in Antarctica, which was published online in 2018. 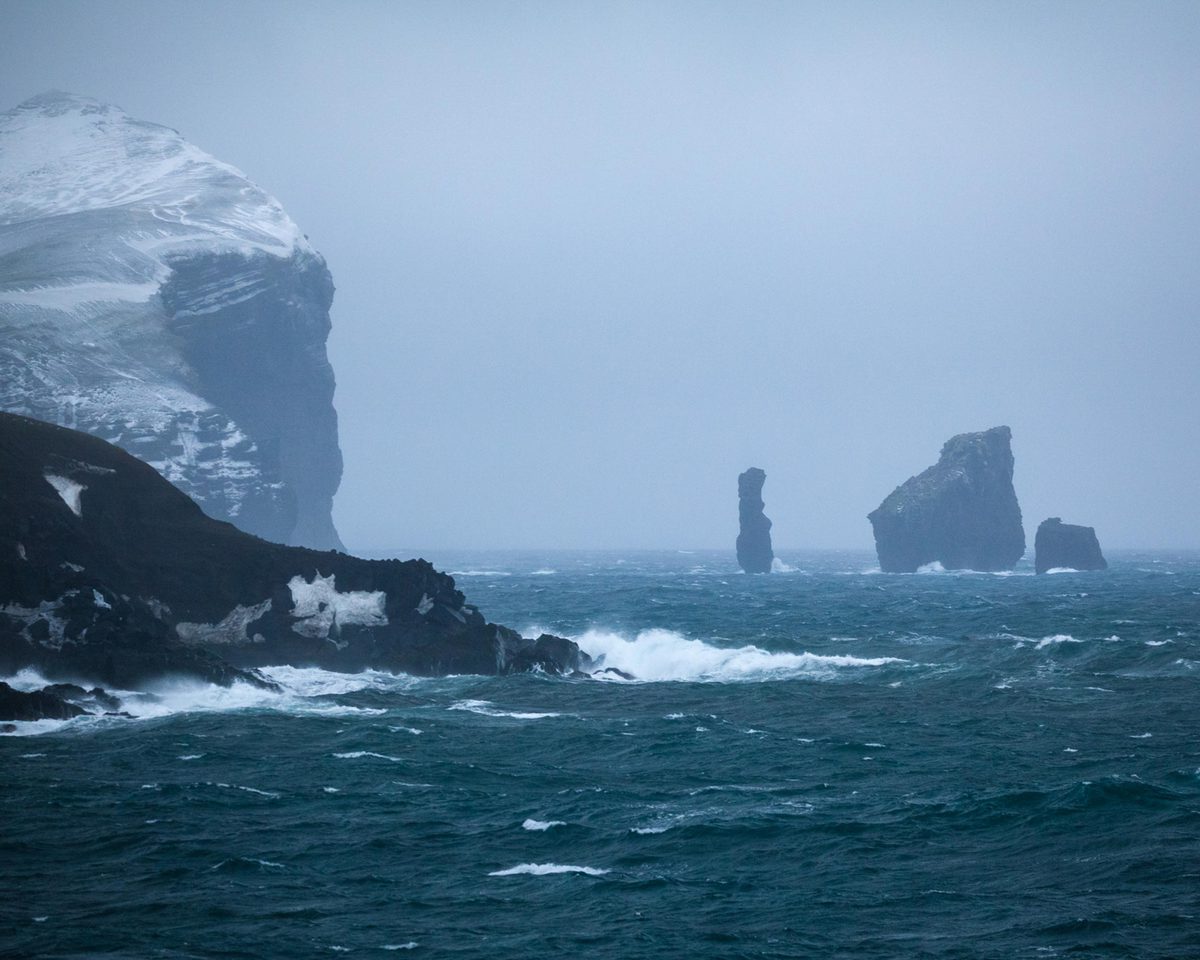 Also this year, Johnson had a dozen photos published in TIME magazine’s 2019 article, “Breaking the Ice Ceiling: The Women Working in Antarctica Today,” in honor of International Women’s Day on March 8. The photos are part of a long-term series she’s working on, documenting her female colleagues during the years spent working in Antarctica, a project she plans to continue in the future.

At some point, Johnson hopes to find ways to combine her photographs with writing – either as part of a novel or through photo books with incorporated essays.

Regardless of what she ends up writing, Johnson said, “It will be set in a location of extreme latitude, and the landscape will be a key feature.”